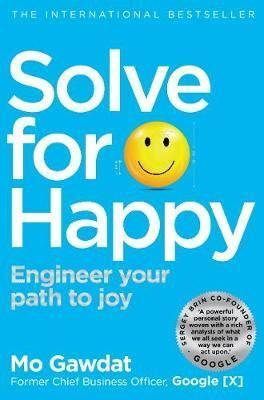 SOLVE FOR HAPPY: ENGINEER YOUR PATH TO JOY

Solve for Happy is the equation for happiness.

This is a startlingly original book about creating and maintaining happiness, written by a top Google executive with an engineer's training and fondness for thoroughly analyzing a problem.

In 2001, Mo Gawdat, a remarkable thinker whose gifts had landed him top positions in half a dozen companies and who - in his spare time - had created significant wealth, realized that he was desperately unhappy. A lifelong learner, he attacked the problem as an engineer would, examining all the provable facts and scrupulously following logic. When he was finished, he had discovered the equation for enduring happiness.

Ten years later, that research saved him from despair when his college-aged son, Ali - also intellectually gifted - died during routine surgery. In dealing with the loss, Mo found his mission: he would pull off the type of 'moonshot' that he and his Google [X] colleagues were always aiming for: he would help ten million people become happier by pouring his happiness principles into a book and spreading its message around the world.

One of Solve for Happy's key premises is that happiness is a default state. If we shape expectations to acknowledge the full range of possible events, unhappiness is on its way to being defeated. To steer clear of unhappiness traps, we must dispel the six illusions that cloud our thinking (e.g., the illusion of time, of control, and of fear); overcome the brain's seven deadly defects (e.g., the tendency to exaggerate, label, and filter), and embrace five ultimate truths (e.g., change is real, now is real, unconditional love is real).

By means of several highly original thought experiments, Mo helps readers find enduring contentment by questioning some of the most fundamental aspects of their existence.

Vista previa: SOLVE FOR HAPPY: ENGINEER YOUR PATH TO JOY